Uncategorized
Leave a comment
Re-blogged from https://australianvoice.livejournal.com/34660.html
TENSIONS BETWEEN US AND RUSSIA/CHINA ARE VERY HIGH
Looking at recent events we can see that the US is adopting a very aggressive military stance in many places around the world:

In Syria they have just killed three Russian Officers.
They are holding war games in Poland near Russian border.
They are threatening N. Korea with complete destruction.

The connection between these events is not understood by many people because our media does not point out two simple facts:

If the US attacks N. Korea China will defend them.
Russia and China are military allies so if one is attacked both will respond.

Any of these separate conflicts in Syria, Europe or N. Korea could lead to the same thing: total nuclear war between the US and Russia/China. 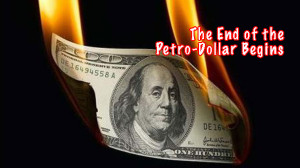 WHY WOULD THE US WANT A WAR WITH RUSSIA/CHINA NOW?

Since 1971 the power of the US has rested on the fact that all countries must use the US dollar to buy and sell oil. This also means that most other international trade is bought and sold in US dollars. Why this is important for the US is explained below.

The threat the US faces now is that Venezuela and soon other countries will start to buy and sell oil in the Chinese gold-backed Yuan. If oil and other commodities are widely bought and sold in Yuan the value or worth of all US dollars around the world will drop to almost nothing.

This will mean that the US cannot afford to buy and import formerly cheap products for consumers or industry. It will also mean that the US cannot afford to pay for some 800 military bases around the world. Without military power to enforce the policies of Wall Street on the rest of the world, countries will have a freedom not experienced since 1500 when the European countries started to create colonies.

HOW THE US HAS CONTROLLED THE WORLD SINCE 1971

American power is based upon the U.S.’s ability to force oil-producing countries to accept payment for oil exclusively in dollars. This is sometimes referred to as the Petrodollar System.

America’s ability to enforce “dollar hegemony” in oil payments artificially strengthens the US dollar and allows American banks to loan as much money as they want without fear of inflationIt will also mean that the US cannot afford to pay for some 800 military bases around the world.

The US dollar is a fiat currency. This means that unlike currencies used for centuries in international trade it is not backed by gold. It is just pieces of paper that are valuable because the US can make countries use them thanks to its military supremacy. U.S. banks can create money out of nothing, with few consequences, due to the military-backed dollar hegemony system. And this is principally what has made America the richest country on earth.

THE US EMPIRE IS A SYSTEM

This system has two major “nodes”:

Each of these nodes are interdependent and symbiotic. The military industrial complex needs MONEY to support itself. It gets this from BANKERS. The bankers, in turn, need a STRONG MILITARY to force the oil-producing countries to sell oil in dollars, thus propping up the dollar so that the bankers can create money out of nothing without worrying too much about inflation.

What makes the U.S. imperial system successful is its flywheel structure:
Being the richest nation on earth allows the U.S. to spend more money on its military…
More military spending makes it easier to enforce “dollar hegemony” in world oil markets…
Dollar hegemony allows the U.S. banking sector to print money at will without it causing inflation…
Endless money printing sustains America’s wealth and keeps it the richest nation on earth…
…and so on, ad infinitum.

The American Empire is a system. It’s not just based on military force and it’s not just based on money. It’s based on a symbiotic relationship between the two, which mutually strengthen and guarantee each other. It is a beautifully designed system. Most people think that American foreign policy is ugly and chaotic — and it seems that way on the surface. But the secret principle that underpins American power is in fact deeply elegant. Real genius went into designing this system.

THE VULNERABILITY OF THE SYSTEM

If the US loses control of how oil is priced, they lose everything.
As it stands, the fact that oil sales are priced in dollars basically gives America a license to print money. But if major oil producers stop selling oil in dollars, the whole system breaks down — and the U.S. will no longer be able to print money without it causing hyperinflation.

This is the importance of the move by China to use the gold-backed Yuan instead of the US Dollar for trade in oil and other commodities. Note that Venezuela has already said it will sell its oil for Yuan, not US dollars. The only way the US can stop the use of the gold-backed Yuan is with MILITARY FORCE! This is why we have every reason to be VERY AFRAID!

This has been copied and modified from the following article:
http://insurgentmedia.tv/new-world-order-part-ii-war-the-petrodollar-and-u-s-imperial-grand-strategy/